Migrating to a bigger Hard Drive 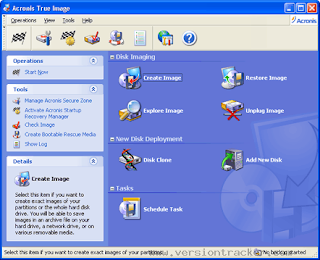 I had to finally migrate to a bigger Hard Drive yesterday due to my Lord of the Rings Online Install growing to over 11GB. I was currently on a 40GB PATA HD and was approaching my limit after the install of LOTR Online. I had an 80GB PATA HD on hand that I was using to image my Windows XP 40GB HD.
I imaged my 40GB HD with Acronis True Image 8.0(older version) onto a networked folder on my other system(Mercury), which took about 2 hours(cheap router). I then Used Acronis True Image 8.0 to restore the image onto the 80GB Hard Drive.
It installed in about 2 hours or so and was I left with a 40GB active, bootable partition and a 40GB unallocated partition. I then created a new NTFS partition on the unallocated portion and expanded the active partition to merge with the new, blank one.
In the end I was left with a bigger 80GB NTFS, active and bootable Windows XP partition.
I realize there are probably much easier ways of doing this with various applications....but this is what I had available.

Popular posts from this blog

March 02, 2014
I recently had to change my on-board drive controller from IDE mode to ACHI mode, due to a new SSD installed. Windows 8.1 was installed with IDE mode by default in BIOS and I had to make the change after this. After attempting to manual change the default set IDE mode to ACHI, in BIOS, I was unable to reboot into my Windows 8.1 install.  After doing a small manual change within the Windows Registry, I was then able to change the on-board drive controller from IDE to ACHI and successfully booted to my newly installed Windows 8.1 environment.  There seems to be a couple different ways to resolve this issue.

This resource turned out to be very helpful:

August 19, 2013
I recently purchased the budget Android phone, the Kyocera Risa, by Virgin Mobile and was looking for the best way to Root my device.

I did find an excellent guide to doing this:

Although the Rise is a bit limited by it's internal hardware, I found that rooting this phone did improve performance as well as opening up various flexible options to other software apps, that would not have been possible otherwise.

The Rise does not support Custom ROMS, unfortunately, but there is some level of customization with apps such as ROM Toolbox, Pimp My Rom and Nova Launcher.
Read more

August 19, 2013
I thought this was a good overview of free remote access options that are available now.  Personally, I've used Teamveiwer many times in the past and would whole heartily recommended it.